Last month, Mr. Handsome & I took a trip to San Francisco, Napa, Sonoma, and Denver!  It was a whirlwind trip, to say the least- but absolutely gorgeous.  One week, I maintain, is not long enough for a vacation- I needed like, say, 2 weeks at least.  I do, of course, have some good photos of the trip to share:
Starting in San Fran, we immediately spent some time on a Pier!
It was warm, sunny, beautiful.  I am definitely a northern cali kinda girl 🙂 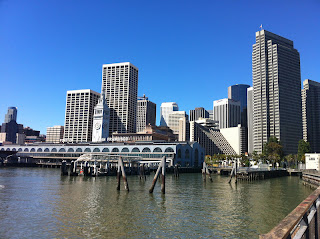 Then we went on a hike near the infamous Golden Gate Bridge:  these are some of my favorite pics! 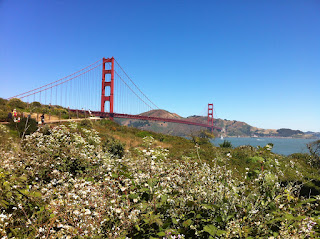 This next one might be one of my favorite pics I’ve ever taken.  Ever! 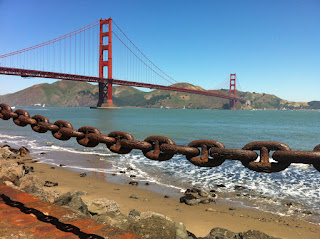 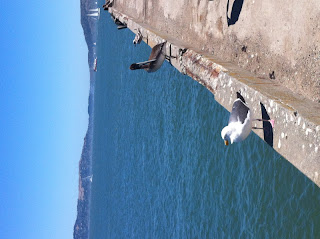 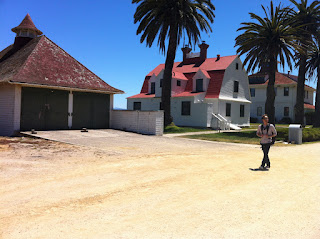 At sunset, on Pier 39, we enjoyed some delicious crab at the Crab House! 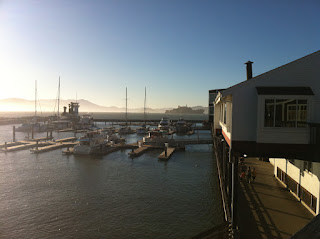 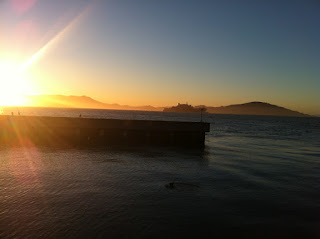 And a surprise: sea lions!! 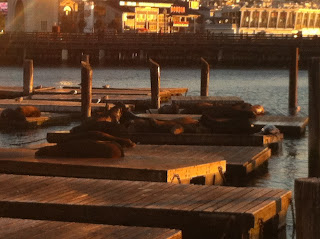 Next up, we drove the short distance to Sonoma and Napa, checked into our (creepy) bed & breakfast (who shall remain un-named, I don’t wanna put them on blast on the interwebs).  We drove the mile over to Francis Ford Coppola’s Sonoma Vineyard- which was beautiful!  A tour & tasting later, we were in full-on heaven. 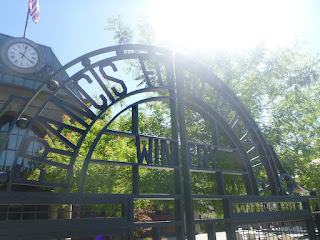 If you’re gonna visit a vineyard/winery in Sonoma and are new to the whole wine thing- Francis Coppola eases you in slowly.  The winery, while it makes decent wines, also provides entertainment in a museum of his works: 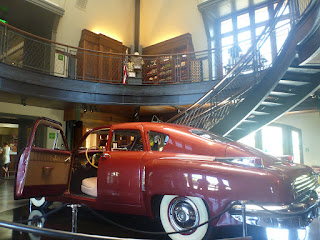 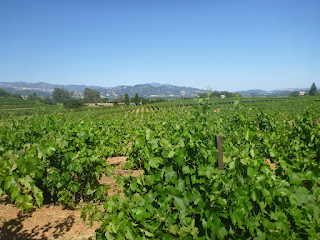 These are Mr. Coppola’s Oscars.  Five of ’em. 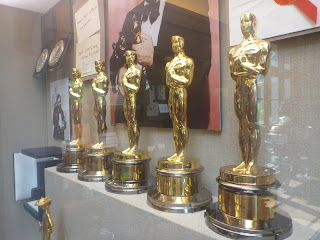 That’s right- Godfather fans.  Not only did we see the very desk at which Vito Corleone sat during the movie, but here are is the screenplay! 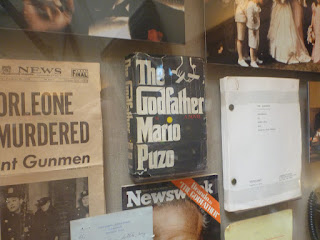 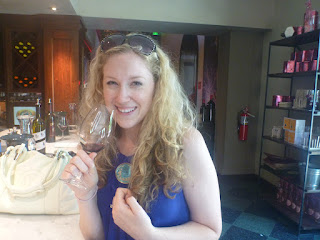 The following day, we hit up the Salon St. Helena (my favorite wine in either Napa or Sonoma on this particular trip!), Hope & Grace, Cakebread Cellars, and Alpha Omega wineries.  All fabulous.

In the evening, we headed back toward Russian River Valley for a taste of the Russian River Brewing Company- loved the sour beers, surprisingly!

The following days, we visited a few Sonoma wineries, including Armeda (terrible wine, comparitively), and Chateau St. Jean, which was fabulous.  Next time we are there, I would like to see Clos de Bois and Korbel!

We did visit one more brewery: Lagunitas.  This brewery is not my jam, as it is mostly hoppy beers.  Unfortunately, I can’t seem to get the taste for hoppy beers, even though they are very popular and easy to drink.  Not for me.  Hubby loved it, tho!

We pit-stopped in Denver to visit with my parents and my grandma, who happened to be living with them at the time.  We hiked down into a canyon, and of course the weather was gorgeous and warm there, too! 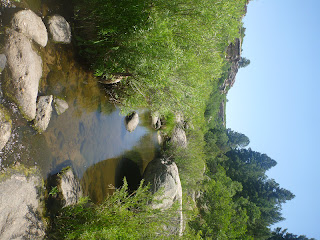 When we returned from our trip, I finished up the remaining 2 weeks of the dreaded 2nd year of residency.  It was so busy, I almost didn’t realize it was over.  Almost.  Since I started my 3rd year, I’ve divided my time between catching up on rest, catching up on the textbook reading I didn’t have time for in my second year, and training for my half-marathon!  And somehow, all of that playing catchup has kept me very busy! And now it’s time to catch up on my blog 🙂

The half-marathon went really well, having never run more than a 5K in my whole life.  On race-day, it, well, poured.  A thunderstorm hit the region just an hour before the start, and I had pretty much decided it was gonna be a bust.  And I was so, so upset!  All my training.  All my hard work.  But, the rains parted right before the race.  Not sure if I’d even make it in time for the race to start, I headed out to the race to survey the scene.  Sure enough, the race had been postponed- so in a last minute decision, I registered.  Within minutes, the race began and we were off!  The rains held off for the first 11 miles, but for the last ~2 1/2 miles, the skies opened up and a literal deluge ensued.  I saw people splitting off to the left and right- and I have no idea where they went- but I had a raincoat packed.  I pressed on, and so did the rain.  Minutes later, I twisted my ankle.  Knowing that the only way to get out of there was to run my way out, I pressed on.  And on.  And on.  At 2 hours and 38 minutes after the race began, I crossed the finish line, soaked to the bone, ankle throbbing- and so, so proud of myself.  I did it- a thing I never, ever thought I could do.

It’s one week later after the race, and I am in physical therapy, doing stretching and water therapy to rehabilitate my ankle.  I apparently sprained the ATFL pretty badly- it was swollen and bruised after my race.  As of yesterday, I have started running again, slowly, and gingerly.  I want to continue to run, not only because I like it, but also because there is another half-marathon in September, in which I am planning to run also.  That said, I’m proud for accomplishing all the goals I’d set for myself over the last 3 months: I baked, traveled, and ran my way through, and I’ve made it on the other side, with extra character to boot!

This past weekend, we managed to fit in one more weekend trip to Toronto!  It was so nice to get away- and I love the hipster, west-coast feel that Toronto has adopted & made its own.  A couple of pics from this recent trip:

This is Poutine.  It is a Canadian delicacy consisting of fresh cut fries smothered in gravy and cheese curds.  Mr. Handsome absolutely loved this!  It’s not my cup of…gravy (!), but I do love the cheese curds.  Everyone should try it once, at least 🙂 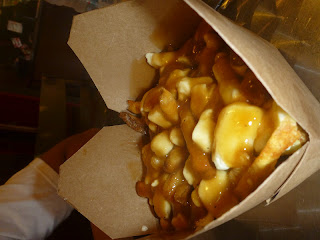 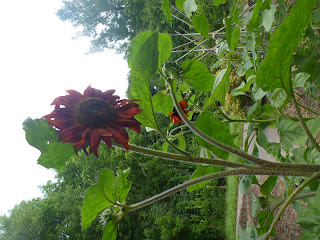 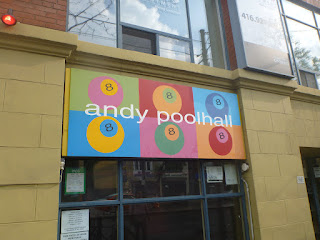 Finally, crossing the border back to the USA, a view of Niagra Falls.  I love the falls! 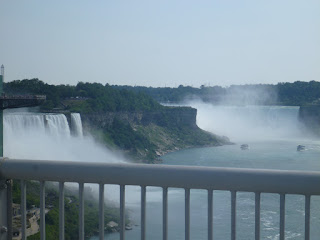 So, now that we’re all caught up, maybe I can try to stay caught up?  I have lots of recipes to share 🙂

1 thought on “Playing Catch Up”