Well, Hubby and I just returned from an unexpected trip to Georgia.  We were present the days before, during, and after Grandpa passed away, and it was just so healing to be there, to see him, and be surrounded by family. We had no interest in leaving, but the careers got in the way (again!).  Let me tell ya, there were some moments with Grandpa I will remember and cherish the rest of my life.  The morning I had arrived, he told one of the sitters that he “was ready” (to pass away, presumably).  We all surrounded him, and I saw my frail Grandpa for the first time in a couple of years.  He teared up when he saw me, which of course made me tear up.

I had decided he’d had a stroke, and that’s why he’d had a sorta sudden downturn.  I thought back to all the patients I’d seen with his type of stroke, and I couldn’t recall one of them that had lived more than a couple of weeks.  So, I expected his passing soon, I guess.  It still didn’t make it easy.  It did help, though, that the whole family was together in the days before and after his passing.  My Aunt & Uncle invited all of us to stay in their house together, with our DOGS, and even gave hubby and I their own room- they have hearts as big as that old Lake Erie.  They opened their home, hearts, and food pantry to the entire group of us.  It was so generous, and it was such a blessing to be around the people I have missed for so long.  Those are the people I don’t have to hide my Southern accent from, the people who don’t judge me, the people who love me despite (or maybe because) of my quirks (of which there are many!!).  Those are my family members, and they are so special, so dear to me.  I don’t see them near often enough.

Anyway, as he passed, he was surrounded by us, holding him and telling him how much we all loved him.  It was the sweetest way I’ve ever seen anyone “sent off.”  And it touched my heart and blessed me so much.  I was so glad that the family had stayed so close during that time – it was so easy to comfort each other & lift each other’s spirits while we were together.  And I have some really wonderful memories, as a bonus!

I didn’t expect the creeping sadness and exhaustion as we left “the compound.”  That was a sneak attack.  It was good to distract myself at work for a while.  It was such a hard day back, though; I hadn’t expected to have the averse reaction to seeing stroke patients after watching Grandpa pass away from it.  My first day back at work, I’d “inherited” a patient someone else admitted with a large brain bleed.  Her brain had swelled to the point of cutting off those respiratory, circulatory, and conscious centers, and she was going to die.  She was breathing exactly the way I’d seen my Grandpa breathe his last only days previous.  And I was not ready to see it again, so soon.  I knew not only couldn’t I let my emotions show at work, I knew I had to tell the family that their mother and grandmother would not make it through the day.  I steeled myself for the conversations to follow: her eventual passing, making her Comfort Measures Only status, and making myself available (presumably as an emotionally neutral physician) to the family for comfort and questions that inevitably follow.  It was the second time I saw that patient, with my attending, that her breathing hit me like a ton of bricks.  This woman was going to pass away.  And hadn’t I just gone through this, only mere days before?!  My heart raced and became sore, and I knew I was having an anxiety attack.  I could do nothing but stand there, so I did.  But when I came home, I just cried.  For my family, for my grandpa, for that family, and their grandma.  It was still too fresh, too soon.  But it’s over and done.  And I must never forget what it’s like to be the family of that patient.

So, with a tough day and the crisp, cool air of fall, I decided it was going to be a comforting stew for dinner.  I made a stew that featured butternut squash, a super seasonal ingredient.  This Chilean Chicken Stew is only slightly spicy, but features all of the stars of your late-summer garden.  And it was definitely comforting!

In a large pot, add olive oil, chicken, and onion, cook over medium heat until chicken is browned on both sides and onions have softened.  Add enough water to the pot to fill it half full.  Season with salt and pepper.  Add green beans, potatoes, corn, squash, and chili powders and allow to simmer for 30 minutes.  Remove hot peppers before serving.

Serving suggestions: Awesome with tortilla chips, cornbread, or over rice.  I would also think it would be great with a little lime juice and possibly some cheese?  (I mean, really, what isn’t good with cheese…)

This stew is warm enough to melt all your worries away and warm your heart on those cool, crisp fall days! 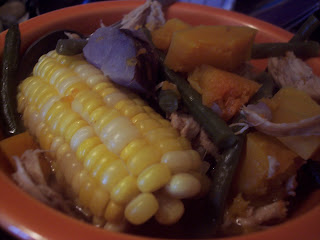