What a name, right?  SO this dish is pretty incredible.  It can make even the most terrible of first weeks on the job a little bit better.  Just like silk pajamas and a bottle of wine, too!

First, wash, peel, and cut 2 sweet potatoes into 1″ cubes and let them boil while you make the raviolis.  Mine are whole wheat.

Combine the flour, egg, water, salt, and oregano in medium bowl.  Knead until it forms a non-sticky dough ball (you may need to add more water if it’s too dry and won’t stick, or less water/more flour if it’s too sticky). Coat the dough with the olive oil & let rest for 30 minutes.

During this half hour, start on the sweet potato filling.

Drain the well-cooked yams (you should have no trouble piercing it with a fork).  Smash them and add milk, 1 Tbsp. butter, rosemary, salt, pepper, and garlic.  Once thoroughly distributed, add the parmesan cheese and let it melt/cool while you roll your ravioli pasta!  <3 multitasking!  🙂

After half an hour, pull the dough ball out onto a well-floured rolling board.  Roll out the dough until about 1/8″ thick, and cut into 2″x2″ squares.

Now, we fill those raviolis: heap a small spoonful of the filling onto the pasta. 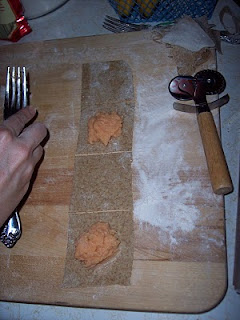 Then, we must attach the top layer of pasta.  First, we make the pasta sticky by brushing water around the edges.  This will make a “glue” to hold ’em together. 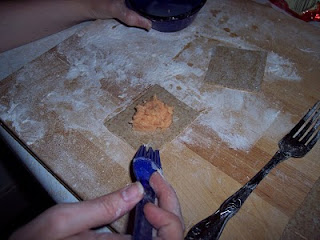 Then we place the top layer of pasta on the filling, and press around those edges to make it seal: 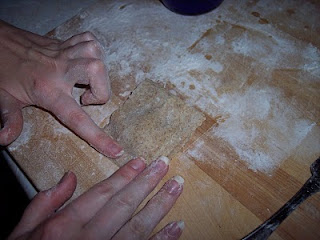 Next, take a fork and press around those edges to make sure that they stick even BETTER! 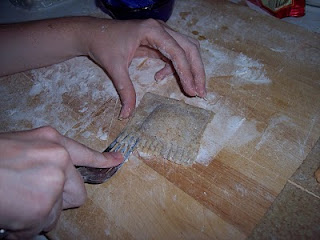 And then you stand back and smile, ‘cuz you made a ravioli!!! 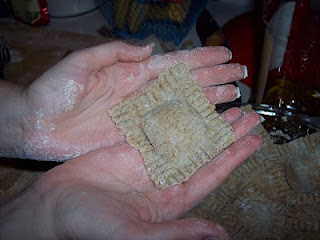 Before you know it, you’ve got tons of ’em! 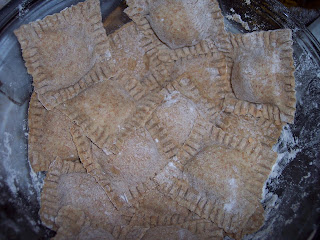 You’ll pop these in a pot of boiling water until they float, about 5 minutes!!

As for the sauce, you can use any sauce you like.  I decided on a homemade oyster mushroom cream sauce:

In a large skillet, Melt the butter and add olive oil, garlic, onions, and mushrooms.  Let them brown a bit in the butter (Oh, Lord!!) When things have caramelized nicely, add the white wine to deglaze the pan.  Add the milk slowly, let it all simmer for a few minutes.

In a separate small bowl, combine the corn starch and water.  Stir well, and add to the skillet; stir all of that deliciousness really well; scrape up all those browned bits.

Toss the fresh raviolis around in the sauce; even throw a few pecans on top if you’re feeling fancy!  Enjoy!!!