We are 27 weeks pregnant!!  Officially made it to  the 3rd trimester!  This morning I had my glucose tolerance test to test for Gestational Diabetes- it was not bad, but it was not awesome.  They have you arrive having fasted since the night before, and give you a super syrupy, sugary thick-ish drink (either lemon-lime or orange) a little smaller than a can of sprite that you have 5 minutes to guzzle.  It was about like a very flat, very very sweet and syrupy Sprite.  I did it- I drank it, and then had to wait for 1 hour for them to draw my blood (to run it for glucose levels).  I was fine for the most part, until the very end of the hour, when I got really lightheaded and dizzy and nauseous.  Ugh- all that sugar on an empty stomach was hard to…stomach.  So they drew my blood, and then I left to go home.  I felt worse on the drive home, and I knew I needed something SALTY and with some protein to balance out my blood sugars.  Unfortunately, there’s nothing open in this town on a Sunday morning bright and early except…McDonald’s.  Ugh.  I was stuck though.  I couldn’t wait to make something at home, much less make the drive all the way home, and I definitely did NOT want sugary stuff like a doughnut (totally out of character for me).  SO I did it.  I went to McDonald’s and got a sausage egg biscuit.  It was salty and everything like I had wanted, but it was too heavy…so I felt better but in some ways now worse too.  It was the weirdest feeling.  I was stuck with some lovely indigestion for the rest of the day too…but I do feel much better now 🙂  I hope I passed that darn test- I don’t want to have to do it again.

This last week has been good, if not full of its own ups and downs.  Mostly good, though.  I am back out of town for 2 months during the weeks, but it was a better week last week than my prior experience, maybe just cuz I am not battling the morning sickness anymore.  And it’s starting to thaw out and become spring, which always puts me in a better mood!

Overall, I’m feeling pretty good these days.  Tired in the evenings after long work days, but not uncomfortable.  I’m betting these days are numbered, if I had to guess.  I am starting to wake up super early in the mornings, as baby moves more in the mornings than ever, and I am waking up to pee in the middle of the night (with this basketball sized thing sitting directly on my bladder).  In fact, baby is moving lots…period.  Sometimes, kicking so hard it makes me shriek with shock, sometimes worsening the indigestion, and sometimes baby sits up under my ribs and makes my heart pound really fast, sometimes sitting way down low in my belly and acting like he wants to punch out!  I think he was practicing ninja tricks this week.  Sometimes I look down at my belly and I see the whole thing change shape with his movements.  I think it’s like having an alien inside my belly!

My doctor’s appointments are now every 2 weeks, so my next one is this coming Friday.  Then, next weekend Mr Handsome and I are planning a trip, kind of a Babymoon, so that we can catch up and bond before baby arrives.  I am really looking forward to that!  I have to attend a few conferences while we are out there, but that shouldn’t be too bad.

I turned 29! My birthday cake: I made a german chocolate cake with coconut pecan filling and dark chocolate frosting.

The birthday morning doughnut: a tradition my momma started for me, and I’ve continued since- it’s the once a year I actually let myself eat a doughnut.  This one was a Krispy Kreme cream filled chocolate frosted delight! 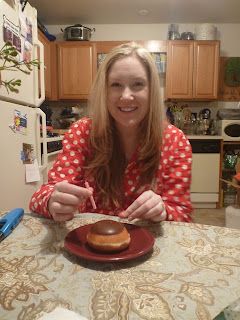 We woke up super early (baby was kicking) and just went to krispy kreme right after it opened.

I’m opening the first of our shower gifts! It arrived on my birthday, so I actually opened it thinking it was a birthday present, but it was our pack n play!!!  We are so excited!!!! 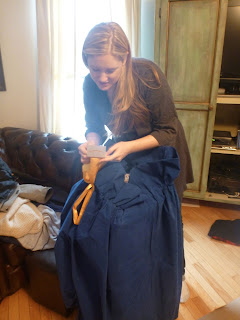 Baby is as big as an:  eggplant

Names picked out: none, unless you count my hubby’s favorite…Bruce Wayne.

Nursery status:  Soooo much work to be done…and not enough weekends to do it!

The countdown is ON!!!