Another week down, whew!  And, good news- I made it to my second trimester!  Slowly, slowly I am starting to feel more human again.  I am getting a little more energy, day by day.  I still have terrible bouts of nausea and morning sickness, but it is mercifully starting to ease up.

In other good news, now that it’s finally December, and I am back at home with Hubby.  After 2 long months, I am home!!!  And after 2 months, the house looks like a bachelor pad, so we spent much of the day cleaning.  I had meant to put up a tree and decorate for Christmas today, but it became obvious that we needed to clean.  So, maybe we will get around to decorating tomorrow night, or later this week.  Hopefully! 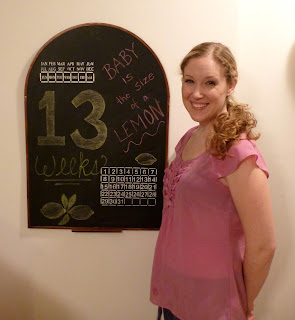 Sooo…after 2 months solid of not working out, of not eating well… I suppose it’s time I try to start eating better and working out again.  Now that I don’t have constant nausea and morning sickness, and my energy level is coming back up, I am hoping I feel well enough to be a healthier mommy!  My poor brain is getting mixed signals from my tummy, though.  For example, I haven’t been really hungry in months, and for the first time, I was actually hungry this week.  But, if I don’t find something to eat in about 15 minutes from that first hunger pang, I’m very, very sick again.  I am, apparently, in something of a delicate state.  And, just as food smells, sights, or thoughts could turn me completely sick (and still do, at times), I have been so overcome with cravings this week, which are equally overwhelming as the aversion was!  I am just a bystander in my own body, which I really do think has been abducted by this kid.

This week is gonna be a big week!!  Coming up tomorrow, I am going to tell my boss that I am pregger- and I am totally nervous!  Wish me luck, I’ll tell you all about it soon!  Tuesday is my 3 month Dr.’s appointment, and I get to hear the baby’s heartbeat for the first time!  So next week’s post should promise to be filled with updates 🙂

food aversions/cravings: onions are starting to become a permanent yuckiness, I think.  However, I have found myself craving ravenously cinnabon (specifically) cinnamon rolls and a steak (which I haven’t wanted in months)

I am most excited for: being home!!!  Never thought I’d be so glad to be back in this town.

I am most nervous about: again, same as last week, telling everyone at work that I’m pregnant.  Yikes!

Hilarious pregger moment of the week: I ripped my pants!!  Just a little.  It’s probably time I go get some actual maternity clothes.  Especially pants.  Woof.  No matter what the cause, it’s still embarrassing to rip your pants.  Also, I’m not a huge fan of the word “Maternity.”  It sounds awfully close to “Matronly.”

We’ll see what next week hold!