This first week back at home has been really nice.  I didn’t realize how I had taken for granted a 10 minute commute to work, or being in a real bed, or even just the cafeteria at my workplace.  I feel so thankful to be back!  And wow, this week was a big week!  I told my boss on Monday and my coworkers on Tuesday about our pregnancy, and it went pretty well!  It’s so interesting to watch people’s reactions- some people are so happy and excited, others look panicked, and still other look just completely shocked.  I’ve gotta say, I’ve been surprised by some of the people who have been so excited- it’s not limited to my closest friends, or even people I know all that well- sometimes, it’s people I barely know, and they are just so happy and excited!  I’ve also had the pleasure of being told how much people I work with have missed me while I was gone…it’s nice to know that people did notice the extra smile I might send, or that I never yell at the nurses/staff in person or on the phone.  I thought no one ever noticed!  It turns out, they did…after I was gone for a couple months!

On Wednesday, I had my 3 month Ob appointment, where they listened to the heartbeat for the first time!  I recorded it, so that Hubby could hear it (he couldn’t make it to this appointment).  I’ve listened to the recording so many times, I think I’ve burned it into my brain, it’s such a sweet sound.  It was around 160 beats per minute, which, according to an old wives’ tale, that means it will be a girl, lol!!  Honestly, though, I don’t care whether it’s a girl or boy, as long as he or she is healthy 🙂

I also went to the dentist for the first time since I’ve been pregnant.  That was sort of a challenging appointment!!  I was expecting it to be ok, but with the tastes and smells and they way they lean you all the way back, I was not feeling so hot after that appointment.

I also did something for myself, a much needed reprieve- I had my hair done 🙂  I fell asleep in the chair, I was so totally exhausted, but my hairdresser didn’t seem to mind.  It was so nice to get out and do something that made me feel like a woman again!  A little pampering goes a long way!

I threw a very small party at work for one of our coworkers who just finished her residency- I feel like we need to take time out to celebrate these things.  Life can get so hectic and in the way, sometimes we (I) forget to enjoy life’s celebrations.  For example, all of those appointments and the party was on Wednesday alone…talk about a hectic day!

On Thursday, I made it to the gym for the first time since I’ve been pregger!  I was so proud of myself- it has been such a struggle to even just get up, go to work, and get home, so I felt pretty accomplished about this one.  I really do want to stay super healthy during this pregnancy- it has been something of a challenge here over the last couple of months, though, with my picky tummy and exhaustion.  I managed 30 minutes on the elliptical, and 15 minutes of (very slow) swimming.  I’m hoping to at least manage 4-5 days a week of that much activity, but I’m gonna have to work up to it.

What else?  Well, by Friday, the morning sickness had gotten a bit better (STILL sick though…I am shocked at how long this morning sickness lasts!!), and my energy level had come up, and then….I got a cold.  And a sinus infection.  And then an ear infection.  And all that coughing and stuffiness has made me nauseous…again.  It’s especially hard, because there aren’t any over the counter medications that are approved for pregnant women, besides Tylenol.  So I’ve been trying to tough it out.  That is, until yesterday/last night, when I was so busy while on call, I only sat down and slept for 3 hours…which made for an extra sick (in every way) today.  Hubby ran to pick up an antibiotic for my respective infections, and I have been very lazy and slept most of today.  Maybe I’m starting to feel a tad better?  Maybe it’s placebo effect?  Either way, I am glad for even a touch of relief!  And that’s my week in a nutshell!  I’ve got to take it a bit easier this week, so that I can rest up and get over this cold!!

Here’s my documentation of Week 14: 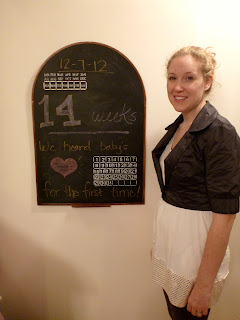 And this week’s stats:

Food aversion/craving:  No onions.  Ever.  Craving pizza and doughnuts!!

Baby is the size of: a Navel Orange!!  I still like oranges….

I am most excited about: Too many things to list!!  Probably topping the list right now is finding out the gender!

I am most nervous about: flying at Christmastime…will the morning sickness translate to being sick on the plane?

The dogs: have known something’s up with me for a while, I think…they both like to hang out with me/on me when I’m curled up in bed/not feeling so hot.  Sassy has become fiercely protective of me…which she never used to do!  She was always such a Daddy’s girl!!