Hubby & I arrived back home yesterday after 8 days on vacation, and it is so nice to be home a day before going back to work!!  We went to Portland, Oregon and road tripped it up to Walla Walla, Washington in a week- and it was incredible!  I can’t tell you how many times we were asked, what brings you to Oregon or Washington, and everyone was always surprised when we answered “The food and wine!”   The idea for our trip was a combination of a Wine Spectator trip and recommendations from locals, which made for a really cool trip!
Wine Spectator Road Trip

Day 1: As we arrived on the airplane, we circled Mt. Hood:

Immediately, I was struck by how TALL the evergreen trees were! They stretched on and on, dwarfing everything around them…it felt like (get ready, this is real nerdy) the Ewok forest, we decided.  We ate dinner at Le Happy, a creperie, and I had a crepe with bananas and nutella flambe!  Afterward, we wanted to go to Voodoo Doughnuts, because it’s on food network!  They have doughnuts with weird toppings like cereal or bacon:

Afterward, we went to Deschutes Brewery with Chris’ cousin, Jonathan, and they each sampled some of their fresh beers:

Day 2: We visited with Chris’ grandma and aunts and uncles, which was great because I hadn’t met any of his family from Portland!  That afternoon, we took a drive toward the Oregon coast, which took us through Tillamook County- absolutely gorgeous country, especially if you love to camp!  We made a stop at the Tillamook Cheese Factory before riding along the coast.

At Tillamook, we took a tour and tasted all their cheeses, and the also have yogurt and ice cream.  The Udderly Peanut Butterly ice cream was the best!  We stopped at Cape Meares, the first of the three capes, and found the lighthouse.

We took a quick trip that evening to Newport, where we found Rogue Ales Public House, another one of Chris’ favorite breweries, before staying the night at Coast Inn Bed and Breakfast in Lincoln City.  After driving all day along the coast, we settled into some fabulous fresh seafood at Blackfish Cafe.

Day 3: We awoke to a fabulous homemade breakfast, and then set on our trail to the Willamette Valley (Oregon’s Napa).  We found several farms along the way which sold their own fruits and veggies.  The region is known for growing fruits and hazelnuts, so we stopped and got some hazelnuts and fresh strawberries for a fresh snack before touring the wineries.  We went to 3 wineries that day; some were recommendations from Wine Spectator, others were local recommendations: The Carlton Winemaking Studio, Beaux Freres, and Soter (one of top wineries of the trip!).  The Carlton Winemaking Studio poured us a taste of 2 Pinot Noirs, from the same year, but from different regions of the same vineyard.  The one from the Basalt Block was so bright and peppery, and the one from the Gestalt Block was so much softer- what a difference soil can make!!  According to WS, the region is known for its Pinot Noirs and some whites, like Chardonnay and Pinot Gris.  Soter was absolutely beautiful, on a sheep farm/vineyard, and they actually had a rare but fabulous Brut Rose that has a cult following (we are now included in that cult following!).

We stayed in Willamette Valley at The Inn at Red Hill, a fabulous inn with beautiful rooms.  At the suggestion of many locals, we had a farm to table dinner at The Community Plate, where everything is local and organic (I was so happy!), and delicious!  I had the chicken with sage butter and cheese grits and greens.  Uhhh, and also the bread pudding for dessert (it was also delish, and I’m no usually a bread pudding girl).  There are so many farm to table restaurants in this region, finding an organic dinner was tough only because there were literally so many choices!  Our hotel had a fantastic restaurant called Farm to Fork where we had breakfast the next morning!

I want to eat everything again just looking at these pics!

Day 4: We continued in Willamette Valley in the morning before a big trip through the Columbia River Gorge.  After our Farm to Fork breakfast, we visited Red Ridge Farms, an olive oil mill/plant nursery/winery.  The owner was so friendly and passionate about his olive oil, he took us through the process of making olive oils and gave us a tasting of different oils and balsamic vinegars; I was amazed that I could actually distinguish different types of olive oil- I thought there was only like EVOO vs virgin olive oil.  I didn’t realize there were actual types!  Then, we proceeded to Sokol Blosser, where we were given a free tasting because of a local recommendation, and Argyle.  (Did I mention we always share a tasting between the 2 of us?  And we were not afraid to sip, swirl, and SPIT.  Otherwise, we’d have been too tipsy to taste any wine!)

After our tasting, we drove through the Columbia River Gorge, toward Prosser, Washington.  We stopped at Multnomah Falls and hiked halfway up a mountain to find the landmark!  After stopping at the waterfall, the land changed in what felt like the blink of an eye from a forest made of the tallest trees to a flat desert punctuated by farms:

That night, we were exhausted and in the middle of Prosser, Washington, which is to say, in the middle of nowhere. The sleepy town shuts down at 8:30 at night, so we were left with Whitstran Brewery, which was open until a shocking 9pm.  So we ate probably the worst pizza I’ve ever eaten (Chris loved it, of course), but they had some admittedly delicious brews.  We found a Best Western and told ourselves to hold on, because some of the best Washington wine comes from precisely this middle of nowhere.

Day 5: Awake to Prosser, eat a quick breakfast, and get our day rolling!  There are tons of wineries in this very region, but not any good restaurants!  Our favorite winery of the trip, Col Solare, is from the Red Mountain AVA, just a few miles from Prosser.  They only produce one kind of red wine blend in that winery, but it was fantastic.  It was an exclusive winery, tough to get in to see them.  I made an appointment, and we arrived, being the only people at the appointment.  The wonderful lady at the tasting room gave us a tour & tasting, including extra special tastings (like their 1999 red-fabulous and complex).  Once she discovered we were going to Walla Walla, gave us absolutely fabulous recommendations on food and wine there!  She sent us to Fidelitas, where we tasted some wine from the Champoux Vineyards, another region well known for making the best wine in Washington.  Chateau Champoux, unfortunately, was unavailable for a tasting, we found out later.  We will try to get in for a tasting next time!  The other winery we visited that day was Columbia Crest, well known for widely available, inexpensive, but delicious wines.  We particularly enjoyed their Tempranillio and Cabernet Reserve.

We drove over to Walla Walla from there, the last stop on our wine trail.  We checked into the highly recommended Fat Duck Inn, a gorgeous bed and breakfast with a gourmet chef in house!  Breakfasts were fabulous.  He also does dinners on weekends.  We ate at Brasserie 4, another highly recommended local restaurant, and had one of Chris’ favorites- mussels and frites!

Day 6: Waking up in Walla Walla, we had a busy day ahead of us!  After a fabulous breakfast of warm lemon bars, granola, and quiche, we set out.  Chris found a local furniture artist who makes barstools and coat racks (among other things) out of used wine barrels!  It’s Vinoture.
Vinoture
We visited their shop, where the very nice gentlemen gave us a tour and showed us some of their latest projects.  We are definitely gonna need some of those barstools at some point in the future!

After furniture shopping, we visited K Vintners tasting room, Rolu Winery, and Northstar Winery.  K Vintners was interesting because it had a very rock ‘n roll vibe (Chris loved this one), and their platform is also economical delicious wine.  So delicious!!  They have a velvet merlot that is wonderful, and around $15.  Rolu is a new up and coming winery, and Northstar is famous for their Merlots (delicious, but we only liked their Merlot, not so much their cabs).  We walked around the historical downtown area, and found record stores and comic shops for Chris and a bakery for me.

That evening came the grand finale to our wine tasting week: the Woodward Canyon Winemaker’s Dinner!  What a fabulous way to end the week!  It was very casual, set outside around a very large outdoor brick oven.  We began the evening with a lovely white wine and some fabulous asparagus and shrimp appetizers, followed soon by a tour of their facilities.  Not only is the winery beautiful, but they own gorgeous art scattered throughout the winery which ends up on their wine bottle labels. 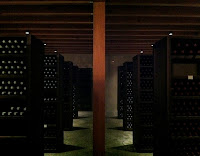 We made our own pizzas and fired them with the instruction of the winemaker himself- who was such an interesting and relaxed person!  We chatted that night talking about the importance of using local resources and discussed the older days of “honest food,” without additives and preservatives, and the finer points of pickling tomatoes.  He and Chris talked at length about the wood-burning oven, and we tasted several amazing wines, all of which we loved.  At a party of about 15 people, it felt more like a family bbq than a stuffy wine tasting, and we made fast friends with 3 lovely ladies who live in Walla Walla, who tried their very best to recruit Chris & I to move to Walla Walla (not that it would take much convincing).  It was such a relaxing a wonderful evening, rounded out by the winemaker’s wife’s incredible rosemary sorbet with fresh strawberry sauce- absolutely stunning.  By the end of the night, we felt like family. 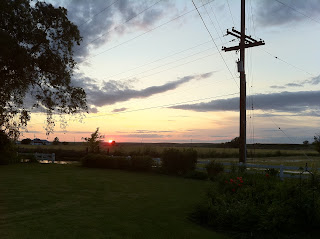 Day 7: Drive from Walla Walla to Portland, and fly back to Pittsburgh.  Would we go back?  Absolutely, without question.  We’re already thinking of the wineries and restaurants we wished we’d had time for!  I love Napa, but Oregon/Washington are not only less crowded at the wineries, but the people are not in the slightest bit stuffy or uppity, the wines are mindblowingly inexpensive, and no one will hesitate to help you find your next place or recommend someplace.  I love this region!