I’m not sure if I’ve mentioned this, but I’m done detoxing.  Over the weekend, Hubby and I decided no more. We’re still eating the way we used to (Sonoma Style), but we had to add back in some more food options; that detox was just way too restrictive.  So now that the detox is over, I’m starting a new project.  Which brings me to…

I got a very early birthday present today!!  First, the box (and my bff Buddy who helped me): 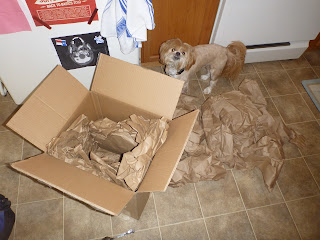 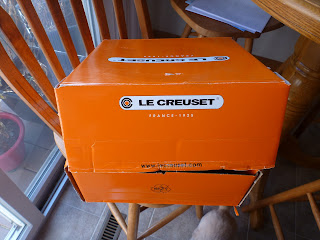 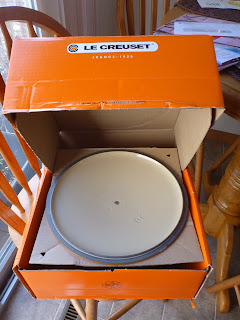 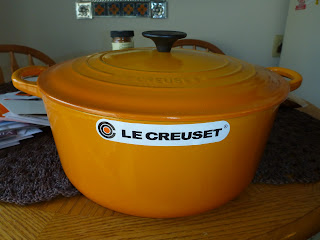 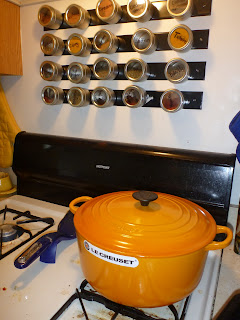 I’m sooo excited to start cooking with it!!  I have been waiting for this piece for a long time!!!  I have wanted to go through Julia Child’s The Art of French Cooking for years now, but lacked this essential piece!!! 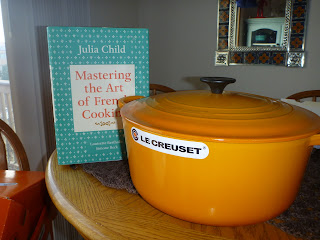 Look at that pretty combo!!  🙂  I’m glad Mom’s got one of each for herself.
So, without further ado, the “new project” (I alluded to earlier) is to spend the rest of the year learning the art of French cooking through the written instruction of Julia Child!!

It’s gonna be a little different than “Julie and Julia;” I won’t be doing every single recipe in the book and I won’t be cooking only out of this book all year (I crave a lot of mexican food, lol).  See, there are several “basic recipes” (if they can be called such), which have several variations, and I’m probably not gonna do all the different variations.  Instead, I’m gonna cook only twice a week from the book (I’m not sure my schedule allows for any more than that), and focus on learning the techniques!  Obviously, however, I’ll blog about everything I learn 🙂

The best part?  Remember how we did the Sonoma Diet in 2011, and are planning to go to Sonoma in California later this year?  We’re planning something similar here…we’d like to go to Paris after learning about French cooking in 2013?  Or, if that’s too far fetched, maybe we’ll go to Montreal (at least they speak French, lol!).  Anyway, I’m looking forward to brushing up on my high school French and immersing myself in the culture!