Being a member in the CSA (community supported agriculture), our veggies are out of control!  We’re getting so many veggies every week that I haven’t even been able to use them all!  Apparently, CSAs are a new trend, because magazines are writing articles about them & recipes for using your CSA veggies.  One such recipe is the
Summer Lemon-Vegetable Risotto, which was delicious! 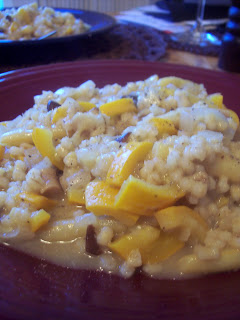 I used pearled barley instead of arborio rice so that it would be whole grain (I can’t find brown arborio rice).

Then I made some FroYo (frozen yogurt), and I didn’t even bother to find a recipe.  I just took my favorite yogurt (Fage) and tossed some in the ice cream maker.  15 minutes later, it was frozen yogurt, and I topped it with blueberry jam, blueberries, and almonds- it was really amazing, actually! 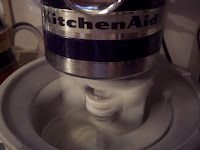 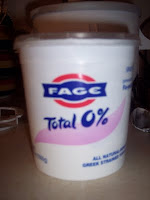 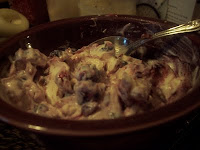 And if you know me, you know I looooooove ice cream.  And I crave it!  And most of the time, ice cream substitutes don’t really get that craving for me.  But this worked- maybe because Fage is so thick and creamy…?  Anyway- I’m totally doing that again!

I have no idea if I ever posted pictures of the Bridal Shower I was asked to throw for my friend getting married in 1 1/2 weeks!  Her colors are aqua and gray, so I designed it with those colors in mind, and I made a pretty table setting.  In the center is a lime brown sugar pound cake, on the upper right is a fruit bowl, lower right are mini bacon-herb quiches, lower left are mini biscuits with blackberry butter, and upper left are bacon-chive cupcakes.  On either side of the cake are lemon cake pops in a blue candy coating (which were a huge hit!!). 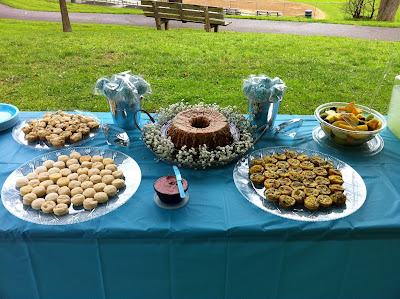 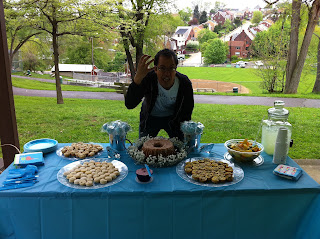 I had so much fun designing and cooking for her shower, and I am so proud of the results!  A good time was had by all 🙂