Sooo glad this week’s over.  Still not looking forward to next week, though.  I’m just ready to fast forward through this phase and suddenly, it’s December!  And then I can come home with hubby again!  I can’t believe it will be that long until we’re back together; it seems so far away 🙁  Honestly, I don’t know how military wives/families do it.  More power to you.

The fall is just gorgeous up here- the leaves are every shade between golden and cranberry, one of the reasons it’s my favorite time of year up here.  Then, there’s the pumpkin patch picking and the apple orchard picking and the crystal clear days warm enough still for just a sweater.  To be honest, though, the leaves are prettier this year here than they have ever been- my whole backyard looks like it’s on fire!  We have had a serious shortage of pretty days, though.  By the 2nd week of October, it had already been bitterly cold (I’m willing to bet it’s gonna be a tough  winter), rainy, and it’s definitely dipped below freezing already!  Which means, Halloween is fast approaching.  It’s always freezing by Halloween!  Today, however, is gorgeous, so let me share the beauty: 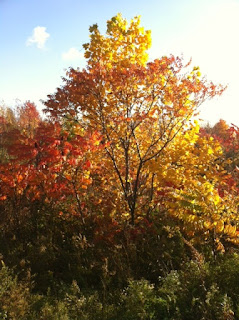 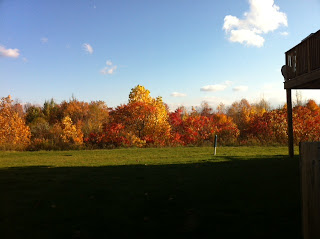 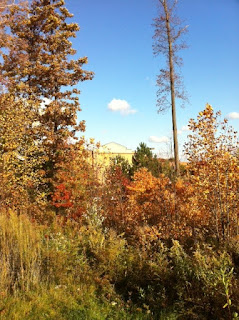 We haven’t been to a pumpkin patch or apple orchard yet this year, mostly because either one of us is working on the weekend or not feeling well.  Hopefully, this will turn around soon 🙂  Pumpkin patch picking is one of my very favorite fall activities!

Lately, Hubby and I have been talking about our future- we have about a year and half left in Erie, and we’re getting antsy for the next stage.  A lot still hangs in the balance, but we should have some answers by Christmas!  We have talked about fellowships (sub-specialty training; yet more training, if you can imagine!), and I personally decided that I do not wish to pursue a fellowship- I am just ready to finally be done training and work!  So that’s my plan.  As far as Mr. Handsome goes, he is debating two options.  Hubby is considering a critical care fellowship, which would be anywhere from 2-4 years of more training, on top of what we’re already doing.  It would mean another 2-4 years of moving wherever they tell us to, whenever they want (which we are both totally sick of), and it would involve 2-4 years of resident-ish salaries (which is not much, really, and we’re totally sick of that, too).  BUT, he would be critical care, which may be what he wants!  More compromises for a delayed gratification, but, if he really does want to do critical care- totally worth it.  The question for him remains: Does he really want to do only critical care?  And only he can answer this question, and only he can make this decision.

His other option, which he said is looking more appealing every day, is to work as a hospitalist when he is done.  This particular option is extremely enticing for him, because he would still be seeing his critical patients, with some not so critical patients, his pay would be decent, and his schedule would be incredible (only having to work every other week).  Making this a very difficult decision for him, especially because he has had very little exposure to critical care specialists (they make them take care of their own critical patients in his residency).

The answer is…we don’t know.  However, he has to make this decision by December (of this year…so like, 1 month away), because that’s the deadline for applying to fellowships.  So, we should have an answer fairly soon!  Which is exciting!!

We also recently celebrated our 2nd anniversary, which was beautiful.  I hadn’t been feeling well at all, but I managed to have a break in the illness long enough for some dinner- and he came down to Pittsburgh (where I am living and working right now) and took me out for a beautiful dinner.  It was really sweet, because I could tell he really had missed me, too (I don’t know why I was surprised, lol!).  He surprised me with dinner at this gorgeous house, it was built in the 1910’s, by a man for his wife.  He stood with her on the edge of a cornfield, took her hand, and promised to build a castle for her on the ground which they stood.  Together, they built this beautiful castle/house place, and opened it to be a restaurant.  It has remained a restaurant ever since!  After our car was taken for valet parking inside the walls of the castle, we were escorted inside and seated in the sunroom.  It was getting dark, but you could see the trees surrounding the sunroom were set brilliantly ablaze with fall leaves.  The food was delicious- I had a steak with red wine reduction, which may well have been the best steak I’ve ever had!  We shared deconstructed s’mores for dessert, and the night couldn’t have been more sweet.  He has such a magical way of making me feel like The Leading Lady in my own life; quite a feat, since my whole life’s work is concentrated on how others feel!  Even when I feel awful and sick, he makes me feel beautiful.  He’s my everything, and I thank God daily for him!  Unfotunately, in my sick haze, I had forgotten to take any pictures (probably good, though, cuz I looked a total mess!)!!