This week has been busy, but much better!  Only rarely do I still have any morning nausea- and it passes very quickly (thank GOODNESS).  For some reason, strong garlic just churns my tummy, even still.  It’s so weird!

This week entailed a surprise blizzard on last Sunday night~ we took in about 18″ snow in 24 hours.  Which of course did nothing to slow these crazy people down- everyone acts like snow is no big deal, but I will never get used to it.  Especially this much, all at once.  It’s super annoying if you have to get anywhere on time- it takes 45 minutes to get to the hospital, when I only live about 5 miles away!!  It takes them forever to plow the roads, so it’s more like slipping and sliding than actually driving with that much snow on the ground.  Which would be fun, if, say, you’re in a field.  But not on the road- there are rules and traffic and people who drive poorly.  And then, if you make it to your destination in one piece, good luck trying not to fall on your butt in the parking lot once you get there, with all the ice!

I am really starting to show this week- baby popped!  At least I think I am, but this was the first week several people were asking if I am pregnant at work.  It was always followed by, “I thought you were expecting, but I couldn’t tell.”  Lol!! Well what did they all think?  I am rapidly gaining weight in one specific region on purpose?  I think it’s obvious, but I’m also used to what I looked like before I was expecting.

On the other hand, I was so meticulous about watching what I ate and working out before I got pregnant, that it’s sort of hard to watch all these pounds creep on.  In my brain, I know it’s good- it’s for baby! – but in my heart, it’s a tough adjustment.  My scrubs don’t even fit at work- the waistband is too tight on the size I usually wear, but if I go up a size, they actually fall straight off.  It’s kind of like being a teenager all over again- your body is all awkward because there are so many changes so quickly.  And then, there are the hormones.  My. gosh.

My back was really starting to feel the ache from gaining weight all on the belly, especially because I have to stand and walk around most of the day.  I tried some prenatal yoga this week, though, that actually took it away, so I may try to do it 3 times a week, just to give my back some reprieve.  That, and maybe I can con a few back massages from the hubby 😉

This coming week, we are looking forward to our Ultrasound!!  One week from today, we’ll know the gender of our baby!!  We’re having a “Gender Reveal” Party, which I had never even heard of until recently.  I guess how it works is that you have the Ultrasound tech write down the gender of your baby and seal it in an envelope.  Then, you take the envelope, try really hard not to rip it open, and give it to a baker, who then makes a cake.  He or she will make the cake inside either pink or blue, and you won’t know which gender until you cut into the cake at the party!  So we’re gonna give it a try- although I honestly think it’s gonna be really tough not to either open the envelope or rip into the cake before the party.  We will post lots of pics of the party next week, so everyone sorta gets to see it! 🙂  I am so excited to find out- I can’t wait to have a name for the baby, rather than call him/her “It” right now.  And I can’t wait to look at some cute baby clothes and stuff, and dream about the nursery, etc.  But most of all, I’m getting really excited to meet this little darling! 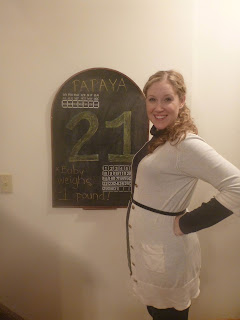 Baby is the size of a: Papaya!  and weighs one whole pound this week!

Food cravings/aversions: still craving tomatoes, all day, every day.  mostly in a marinara sauce.  Seems like my only aversion left is strong garlic smells.  Loving spicy, spicy food this week!

Inches of snowfall this week: about 30″ total, and still counting as we speak

Looking forward to: the ultrasound!!!!  And cutting into the cake, and then eating the cake 😉

Nervous about: falling on the ice 🙁

Cute Hubby moment of the week: I love how he always holds me when we’re walking on the icy sidewalks.  He’s so sweet to protect me and support me 🙂

The puppies: love stepping on my belly, oddly enough.